The Damper and Drag of Olympians | Concept2 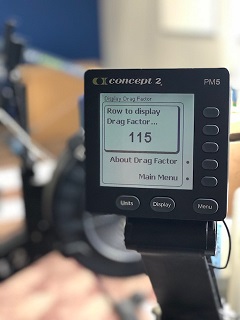 Concept2 generally recommends a damper setting on the indoor rower between three and five. Damper Setting is not resistance. The damper controls the air flow into the flywheel. It affects the feel of the stroke, but does not directly determine the resistance—which is generated by the speed of the rotating flywheel. A setting of “10” is not “better” nor indicating strength or speed. In fact, we asked some of our favorite Olympians and coaches what damper setting they use and why. The answers and their reasoning, below, may surprise you.

The athletes we interviewed prefer to adjust their indoor rowers to a specific drag factor instead of to a damper setting. Drag factor is recalculated on every run-down of the flywheel and takes local conditions into account. Indoor rowers adjusted to the same drag factors will feel similar, regardless of what damper setting is used to achieve that drag. It is important to note that the Performance Monitor self-calibrates, so regardless of damper setting or changing conditions, your true effort is measured. Here's how to Display Drag Factor on your Performance Monitor.

“When I used the Concept2 Indoor Rower I always used a 130 drag. To be honest, that number just comes from the New Zealand program and it was a standard when I first started looking to make the team as a junior. The 130 number would be what you would have to do a trials erg on. So it just became a norm for all the training and pieces and ultimately the 2000 meter pieces we did.

We played around at times with different damper in training. We spent a lot of time doing it on ‘1’ and really feeling the speed on the flywheel. It teaches you to really be connected and not have too much slip around the front, or you miss the speed for the stroke. We did more of that than power strokes. Most of the power strokes we did were with bungees on the water.

So 130 was the magical number I did everything at. All my long distance World Records I’ve got were at 130 and my 2k was at 130. It’s an interesting thought as to what people do around the world and I would say it’s very specific to people’s abilities and strengths and the ways they row the machine.”

What about a damper setting of 10?

“10 serves a purpose for the VERY strong blokes who can produce the power. It is impressive to watch them do that.”

What workouts (if any) have you done at a damper setting of 10?

“Only ‘power strokes’ like one minute on, one minute off, and changed the damper in between while we were paddling.”

For your workout, what’s your damper setting?

“Long ago someone told me that drag 120 was appropriate for women—as I remember, it was the junior team coach. I did a lot of erging back then, and it became what I'm used to and comfortable with. As I got bigger and stronger I bumped it up a bit, but not much. Ultimately I don't really think it matters what you use—within a reasonable range—as long as you're consistent.”

What settings would you recommend for training and racing?

“I recommend using a damper setting that sets the drag around 120-135 (depending on how big and strong the athlete is). That's what I use for myself. 120-135 is what I would call the ‘normal’ range for rowing. If you get too much outside that, either on the light or the heavy side, I think you'll find you get diminishing returns and increased fatigue. But most of all, you should test using the same setting you train with because that's what your muscles have adapted to.”

What about a damper setting of 10?

“Damper setting of 10 is a recipe for injury.”

“I’ve done an on/off short interval workout at 10. I had to be very cognizant of the pickup so as not to hurt myself.”

“I use the calculated drag more than the damper. I look for a drag of about 112 (though I’ll go up to 115 for low rate—capped pieces—24 and below) and adjust the damper to hit that 112 (which is usually around 3).”

“None! That's a recipe for injury. I have done plenty of workouts on '0', which were required in college for athletes with any rib or back tenderness.”

For your workout, what's your damper setting?

“115. It's slightly lower than what I used as an athlete on the national team (1991-2000 US National Team Lightweight); mainly, though, I use this number now because I can’t make as big an impulse (as I used to) to keep the flywheel moving smoothly on each stroke. Even though I row a single, a slow boat with a slow pick up, I’m not trying to hammer the drive right after the catch. This setting feels similar to me.

I don’t change it regardless of my workouts the same way I also don’t change the rigging in my single for different workouts.”

As a coach, what damper and drag setting do you recommend?

"Depending on the strength and skill of my athletes, as well as the speed of their boat class, I might go as high as 120-125. They might be better suited to a stronger pick up on the drive which would lend itself to a higher drag setting.”

“Only a very specific power workout. Go max power for 10 strokes. Starting every 60 seconds, no matter how long the 10 strokes take, do 90% max watts for 10 strokes. When watts drop below 90% for two intervals, you’re done. Otherwise, continue for a total of 20 intervals. This is done with a drag factor set at 200 (or damper setting of 10). Every stroke is full slide. This would be like doing a bungee row on the water." (Adapted from an Ed McNeely workout.)

“I do not do general workouts at a damper setting of 10.”

For your workout, what's your damper setting?

"I use drag factor because most ergs get dirty and the older they get, the dirtier they get, which means damper settings are not the same. Drag factor, from what I gather, is. So for 30 minutes or any long steady state workout I like 140. It's enough resistance you have to work, but not so heavy that it becomes just a strong man contest. When I was younger I loved heavy settings because I had the raw power to just crank and it worked great. The older I get, I tend to let my cardio carry me more than my power."

How do you use drag factor in workouts?

"I have a number of workouts where I switch it up. For instance, I have a power workout where I put the vent all the way up to 10 and use the erg like a lifting machine. Vent 10, 20 stroke pieces as hard as I can pull with a low stroke rating. Yup, it hurts, but it's a great power workout. For high stroke rating work, I put the vent real low, and 'tap it along', then add the juice later in a different practice. If I am recovering from an injury, I may also put the vent real low to change the load. I use the vent occasionally to help me make things harder, or easier, or work on my rowing pathway and speed. The vent makes the erg into a tool to work on different aspects of the stroke and race."

Since 2020, Concept2 has supported over 25 new and growing clubs that are pulling together to make a difference in… t.co/rr8ya7UU0g @concept2 about 1 day 6 hours ago.