Rowing Goes to the Movies: Heart of Champions | Concept2 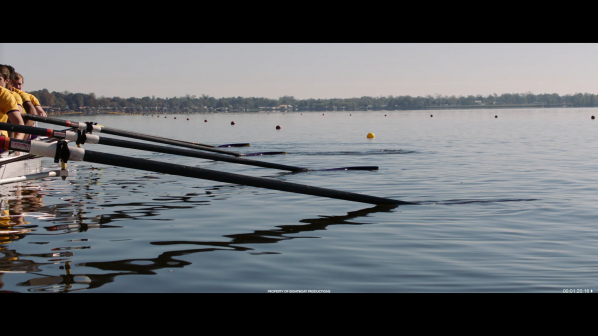 The on water rowing community is excited that rowing is featured in the new movie, Heart of Champions, arriving in theaters on October 29 (available on demand starting November 19). The trailer is available now.

The movie, set in 1999, features authentically-reproduced Concept2 rowing equipment. The producers took extra care to accurately reflect rowing for this sports drama, in which actor Michael Shannon stars as an army veteran-turned Ivy League rowing coach. His character is an alum who rowed for the same university.

Nine-time US National Team member and three-time World Champion Linda Muri, the film’s rowing coach and consultant, trained the actors and athletes with workouts twice a day over a week. While four of the actors already had extensive collegiate rowing experience, the rest of the crew had to prepare individually before coming together as a team. Muri’s training regime simulated a Spring Break or Winter Training Camp for the actors. This intense schedule brought together a team as dedicated to the oar as they were to the script.

Heart of Champions ensured that even the coxswain received proper training. The actor worked with Rory Copus from the United Kingdom, who is the head rowing coach at the Abingdon School. Copus’ 2009 high school race became a reference for much of the coxswain’s commands.

The actors talk about their “rowing camp” experience in Behind the Scenes. In a very short time, Muri was tasked to transform actors into credible college athletes. To do so, she focused on technique, drills, body positions and stroke sequence. To hear the actors fall in love with the sport is a testament to their experience together.

While most of the rowing happened on site in Louisiana, additional scenes were created using a green screen. The green screen allowed the director to best capture the actors’ interactions for close-ups and audio. A custom built indoor pool provided the indoor platform for the rowing shell, oars, and coaching launch. These additional scenes add drama and bring the viewer right into the action. For the larger regatta scenes, over sixty experienced oarsmen and coxswains from all over the country were flown in as extras.

Concept2 provided ten RowErgs and original marketing materials to the production company for filming. The film’s writer, producer and former collegiate rower, Vojin Gjaja, says “I could not even imagine making a rowing movie without Concept2 RowErgs. They are such a huge part of any rower’s life and so they needed to be in our rowing movie. We are very grateful to Concept2 for shipping the RowErgs to us for use in the production.”

In 1999, Concept2 produced the Model C Indoor Rower. Since the Model C was last produced in 2003, we did our best to replicate this older model by providing gray machines with the original wooden handle with foam grips. Astute Concept2 fans will recognize that these “Model Cs” include some minor modern changes. Similarly, the Concept2 oars look much like what was rowed in 1999 but were built using our most recent production practices. It’s all a bit of movie magic!

We’re honored the producers took care to involve Concept2 in the making of Heart of Champions. We look forward to introducing more viewers to the passion and excitement of rowing through film.

The Ukrainian 🇺🇦 LM2x win their Heat. Igor Khmara and Stanislav Kovalov have been living and training in Bulgaria t… t.co/gdwMzVCGKo @WorldRowing about 1 day 1 hour ago.