On the Road with the RowErg | Concept2 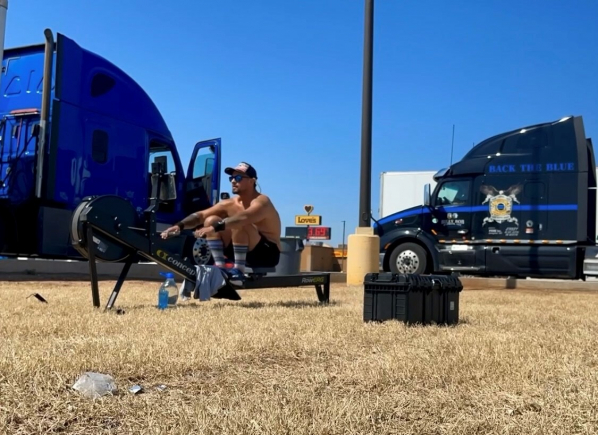 Benjamin Becerra is a commercial truck driver who found rowing out of necessity for his job, and has since made it a part of his lifestyle, even while on the road. Finding the time and place to work out can be a challenge, so that’s why his Concept2 RowErg comes along with him for the ride.

In 2018, after undergoing a physical exam required by his employer, Ben was told that he was morbidly obese. As a result, he was only able to get a 30-day medical examination certificate for commercial trucking. This meant he had to return for a physical exam every 30 days if there wasn't a drastic weight change. Having previously been on a 2-year medical certificate, he knew he needed to make a shift. It was important to him as a hard-working person, as well as a father, to make a lifestyle change. He needed that 2-year certificate, and he wanted to be a positive role model for his daughter.

Ben tried gym memberships, but as a commercial trucker, it led to unique issues, such as the challenge that most gyms don't exactly have big rig parking lots. Ben tried rowing and fell in love with it, and then shared this love with coworkers. One particular coworker sent Ben a video of his RowErg in the cab of his truck. With that, Ben followed suit, and his RowErg began traveling with him.

“Everybody that sees me at first is like, ‘you're nuts.’ But the guys that actually take the time to come out and try my RowErg are like ‘woah.’ You can go super hard. The world’s strongest men use these and they don't break. This machine will break you before it breaks."

When out on the road Ben finds motivation and encouragement from the Concept2 community. He uses the Concept2 Online Logbook and follows Dark Horse Rowing and Training Tall for training tips, technique advice, row-along workouts and other motivational videos.

“The community behind Concept2 is just crazy. You jump on Facebook, you jump on Instagram and people are super encouraging. I've had coaches reach out and say, ‘We saw your technique—you can improve on this.’ I love it. I absolutely love it. It's crazy to me that I've implemented those things and I've actually improved.”

Ben can't stress the advantages of the Concept2 community enough, and finds motivation in the diversity of users and their stories—from professional athletes to the average home user.

Ben set a goal in February of completing an average of 5000 meters a day, and he hit the one million meter mark on July 31! He continues to use the logbook and the Concept2 community to stay motivated, and he hopes to inspire others as well. He fully sees his RowErg and Concept2 as more than just a means to work out.

“Concept2 is a brand that has more value than just great fitness equipment. I use the RowErg not only for physical fitness, but more so as a tool to help me decompress from the stresses of my environment. Traffic is a nightmare, and most days I am mentally exhausted by the time I finish driving. So jumping on my RowErg for 2k, 5k, or 10k gives me time to decompress.”

Ben recently joined Concept2 trainer Cady Hart-Petterssen on the As the Flywheel Spins podcast. Check out the episode here!