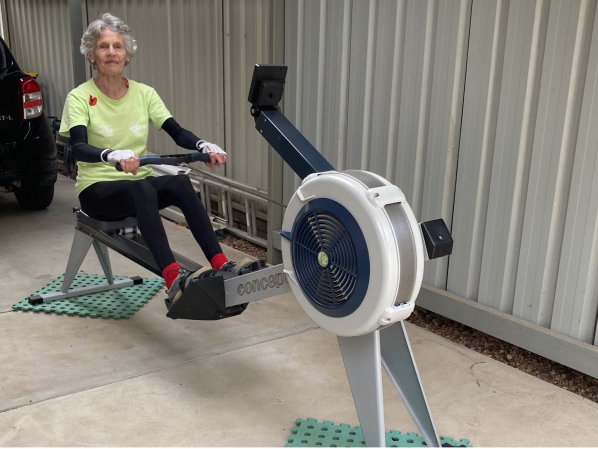 Anne Cresswell is 84. In the past 16 years, she has set 34 age group world records on Concept2 RowErgs, including 16 she still holds today. Three of her records she has held onto for over 14 years!

Born in London, England, just before the outbreak of the second World War, Anne was evacuated to the countryside to escape the bombing raids and the London smog. Inspired by her rural surroundings, and the Women’s Land Army—a civilian organization that recruited and trained women to work the farms when the male farm workers were called to war—she dreamed of growing up to be a ‘Land Girl’ with her own cattle.

At agricultural college in Devon, she was introduced to competitive on water rowing.

“It was in heavy wooden boats and oars. We had to get to practice under our own steam, often in the dark to catch the tide, and often hopping on the back of the guys’ motorbikes. It was all a bit primitive,” Anne says. Before the days of synthetic materials, she rowed in heavy corduroy shorts, hand-knitted sweaters and gloves on the icy estuaries.

She learned to row well with a good coaching technique. “Rowing in Stroke position, I had to set an example to the three women sitting behind me,” she describes, with a smile.

After hanging up her oars, Anne left the sport of rowing for almost 40 years, but it did not mean the end of her adventurous lifestyle. She moved to New Zealand, and then to Tanzania with her husband, before finally settling in Australia where she taught, farmed her own cattle, and started a family.

It wasn’t until Anne retired from teaching at age 60 that she discovered a new sport. Her daughters gave her a surprise sports gift pack, including a Lycra racing suit, goggles and flippers. That started Anne’s 10 year stint of competitive swimming with a masters team, achieving national top-ten rankings in all distances and strokes. A swimming friend suggested Anne try indoor rowing as a means of cross-training.

“I had never been on an erg before,” Anne says. “It was 50 years since I had raced on the water, but it was like getting on a bike again.” Except, Anne says, that it was actually more pleasant. “There was no coxswain to obey, no boat to ‘level’ and no choppy water,” she says.

In fact, after her first few sessions, the gym manager said, “I”ve never seen such a grin on any rower’s face before.” He persuaded her to try for the C.R.A.S.H.-B. Sprints in Boston, Massachusetts. Anne’s efforts were successful, and she raced in Boston twice at age 67 and 69, coming away with one silver and one gold medal.

That introduction to indoor rowing was a welcome alternative for Anne and her competitive nature quickly flourished. She found herself motivated by the Concept2 Online Rankings and, despite being a lightweight, she also uses the times of heavyweight women in her age group to help provide targets.

“Certainly the rivalry between the rankings is fun. I’ll get an email from a friend in the USA asking if I am asleep because she got within three seconds of my time. That keeps me as motivated as the state, national and world competitions,” she says.

Anne motivates herself with online challenges; beating her own records; fundraising half marathons; virtual races and, more recently, a 43 kilometer row for the Anzac Day challenge. She is careful to point out that records are there to be challenged and broken, but there can be other motivations for other people.

“It is a disadvantage being known for winning a few things, because people naturally assume you want them to compete. I explain that it is just my way because I’ve got nobody around to motivate me,” she says.

Anne continues to encourage the local farming community to row for the health benefits. “Most farmers say they are too busy, so tired, that they don’t have the energy, but once the wives start, they join in. Just before going out to the paddocks or to feed the cows, they do a 30-minute row on the erg. That’s just great!” says Anne.

Anne mixes erg sessions with group core strength and stretch classes, and is a big advocate of the Concept2 RowErg, calling it one of the safest forms of sport for people of all ages—if done correctly—she emphasizes. While she stops herself from correcting strangers at the gyms on their rowing technique, she channels her knowledge and experience into coaching and mentoring athletes of all ages on the RowErg.

Her aims? To remain active and healthy and continue to sit on that narrow seat for as many more years as possible.