Rowing is a Leg Sport | Concept2 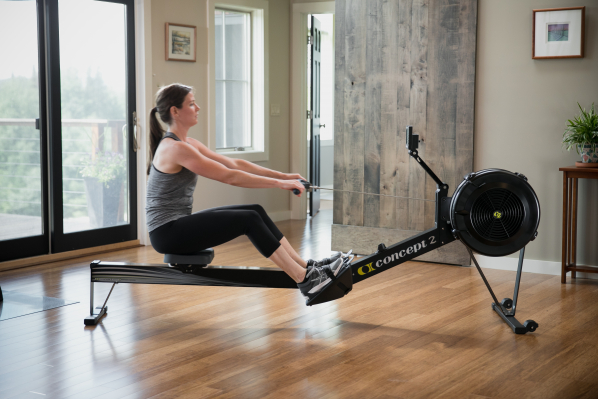 Some people associate rowing with a traditional rowboat, where you sit on a fixed bench and row using just your arms, back and core. While these boats have been used for ages for recreation, fishing and transportation, they are not particularly speedy, streamlined or efficient. With the addition of a sliding seat, rowing (for recreation or racing) is a full-body motion that engages all of the major muscle groups of the body—most notably adding the legs.

It’s been estimated that the amount of muscle involvement in the stroke is 60% legs, 20% core and 20% arms. For those who don’t do much else in the way of upper body exercise (such as running or cycling) rowing is unique in that it does include the arm muscles. But in reality, rowing is a great full-body workout because all the major muscle groups are used in the stroke.

From the catch position, the legs initiate the drive part of the stroke. The legs are the biggest, strongest muscles used in the rowing stroke and are the best tool to accelerate the flywheel during the drive. During the initial push with the legs, the arms are kept straight, acting as the connection between the legs and the handle. Then the back is gradually pried open and the stroke is finished with the arms pulling in to the body.

Similar to a deadlift, the legs in the rowing stroke help move the handle. In a deadlift, the barbell is raised with straight arms and by using the strength of the legs. In rowing, the legs similarly need to do the heavy “lifting.” More “weight” can be moved with the legs than the arms.

The more power you can put into the flywheel, the faster you will get it spinning, and the more resistance you will feel. In fact, rowing involves a significant amount of pushing—not just pulling. These are two common misunderstandings: Rowing is more about pushing than pulling, and more about legs than arms.

Rowing is a terrific full body exercise for everyone!

@imrstack @MarkCalc And then you have to actually get on the erg. And then use it. We've done studies; simply havin… t.co/9YQSKS3twu @concept2 about 4 hours 32 min ago.