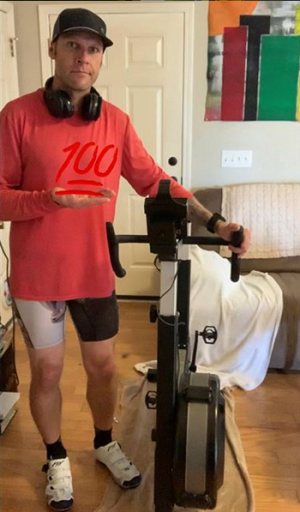 James Hanson is the Global Motocross Manager for Rockstar Energy Drink. He handles all of the brand's off-road motorcycle racing around the world, and loves and appreciates the fact that he is able to stay in the sport he is so passionate about. We last talked with him in our 10 Questions blog series in 2018, and checked in with him again recently after he and Australian racer, Jackson Richardson, completed 24-hours on the Concept BikeErg.

Where did you get the idea for a 24-hour ride on the BikeErg?
Technically, from Pro Morocrosser Dean Wilson, after he completed his first century on the road and posted it to his Instagram account. I commented, and asked if he dared me to do one on the BikeErg. It didn't really matter what he said, I was already committing myself. At the time, I thought the 100 miles was super gnarly. Then Jatz (Jackson Richardson, the other organizer and rider of the 24 hour) saw me do it and took it upon himself to take it down as well. Like a couple of satisfied fools, we went on with our lives for about 20 hours, then Jackson sent me a video of a guy doing a 24-hour ride. He should have known better!

What was your strategy around food and hydration for the event.
As far as hydration, my #1 was Hammer Heed and Endurolytes Extreme in 20 oz water bottles. With my climate controlled, I had to dial back water consumption a bit, but to stay on electrolytes, I would drink sparkling water with Endurolytes capsules. I did dive into some Pepsi and Rockstar as well anytime I felt like I was anywhere near a bonk. I fueled with Hammer, bars and gels but my main source was real food. I grilled chicken, steak, Kobe Beef meatballs and made roast beef in the days prior. All seasoned with ginger, turmeric, oregano, basil, mint, parsley and thyme, which are good for preventing inflammation.

I made Pinole brownies, made famous by the book Born to Run. Pinole is pretty much the only thing the Tarahumara Indians of the Copper Canyons in Mexico eat. These "super athletes" run hundreds of miles like it's nothing. A big one for me was homemade rice cakes with sauteed fresh ginger root and bell peppers in coconut oil. I mixed donuts and Snickers bars in the same way as the Pepsi and Rockstar. One thing I noticed that was really big for me was as simple as salted potato chips. Oh, and one more thing, I had an entire water bottle of pickle juice and I ended up drinking the whole thing! These kinds of events on the BikeErg are so great because everything is within arms’ reach, so it is incredible for testing fueling for ultramarathons. I'm happy to say that my fueling ended up with perfect results, with no stomach or cramp issues at all.

What did you think would be the hardest part, and was it?
If I'm being completely honest, I really had no negative thoughts going in and felt pretty confident. I've done so much research and been through so much in the past 15 months learning from mistakes and failed tests, combined with Epstein Barr and multiple illnesses and injuries. I've been to some very dark places in the process and knew how to get past them. There was never a time in the entire 24 hours that I went anywhere near the places I've been in the recent past. I've purposely trained myself mentally through difficult situations and have learned so much about perception.

I got a little sleepy around 16 hours and that was the same time we all went a little insane for a bit. But it was brief! On the note of perception, when I passed the record for meters in 24 hours, I noticed the pain much more and that's how the mind works, no matter the distance. To prove that even further, I was able to drop the hammer in the last hour when I realized 600k was in reach. Numbers always push me. When you think you can go no further, you're probably wrong.

What started to go first, mind or body?
If you are in control of mental, the body will always go first, but you can block it if you don't dwell on it. I mean, my butt hurt in 10k, but again it's all what you focus on.

Who was part of your support group, in person, on Zwift or via social media?
The support was absolutely unbelievable, globally. Thousands of comments and messages, constant encouragement through calls and FaceTime, as well. Many people donated to charity in our names. We couldn't be more pleasantly surprised with how this went with so little planning. So many people did more than they ever thought they would themselves through participation just because a couple idiots who ride dirt bikes decided to do something deemed impossible by most.

What did you do to pass the time while riding? Movies? Music?
The funny thing is that I'm pretty sure I spent 18+ hours on the phone. I made it through one Dave Chapelle special and the original “Hangover” movie. That was it! And they were both paused dozens of times haha. Music is a really big thing for me and I didn't listen to one song!

When did you start racing dirt bikes and what does your physical training look like day to day.
I unfortunately didn't really start riding/racing dirt bikes until I was 16, so I missed out on the mini bike life. Looking back that would have been so fun! So, I just started riding mini bikes in my 20s haha. The majority of my training is running, with the indoor rower and BikeErg as secondary training. It's very necessary to change things up, so the two are a huge part of my program. I usually do some specific weight training for ultra-running 4-5 days a week as well, so 2-A-Days and 3-A-Days are common.

Anything else you want us to know about or think would be cool?
I would just tell you to follow along because we are going to keep doing these kinds of things to get people going. We have some future plans and they will likely be often until we can get back to normal life.