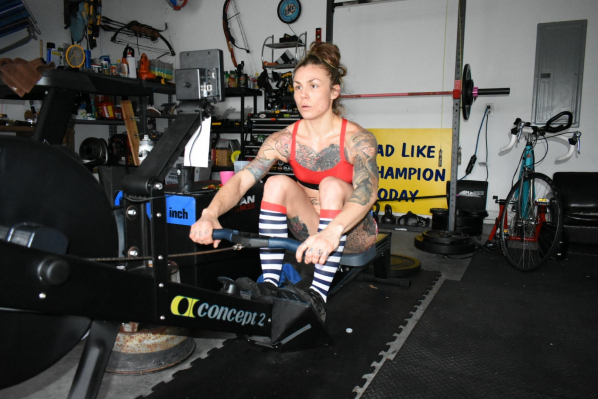 Lorraine Walker: I was born in New York, and am the middle of five children. I served in the United States Marine Corps as an Aircraft Rescue Firefighter, a combat swim instructor, and a pistol range coach. I am married to an active duty Marine, and we have four little girls and two big dogs.

Have you always been an athlete? What was your first sport, and how did you get started? Yes! I tried a lot of sports growing up like soccer, gymnastics, volleyball. But the one sport I was good at was swimming. I started swimming competitively when I was very young. My mom was a swimmer, and so my brothers and sister and I were always in the pool growing up. I’ll never forget the first swim team I tried out for when I was 5, and the coach told me I didn’t make it. I went back the next year and was one of the fastest little kids they had. I swam through some college, and into my enlistment in the Marine Corps.

Who has been an influential coach in your career? In high school, my mom was the assistant coach to our Varsity team, so naturally she has always had an influence in my competitive nature and probably where my iron will comes from. And also my college swim coaches, Dr. Jane Katz and Mort Steuer, were two huge influences for me. My college swim career was not very long, but those two coaches were amazing people who really understood what a true coach-athlete dynamic is all about. They always showed each individual athlete support, regardless of their talent. That’s not something you find in many coaches.

What/who got you into using Concept2 equipment? The first time I ever used a Concept2 Indoor Rower was in a CrossFit gym. I had no idea what I was doing like most CrossFit athletes—either pulling the chain as hard as I could to get the Calories to count as fast as possible, or using the indoor rower as the recovery period in a WOD. I met Rob and Lizzie Carson through the gym I attended where they held weekly rowing classes. They taught me correct rowing form and technique, encouraged me to enter Row’d Royalty that year, and really got me started. I traded out my elliptical at home for a Concept2 and the past two and a half years have been fantastic.

What is your favorite workout on a Concept2 product (and why)? I will take a long, low rate, steady session ANY day of the week over sprints. Like a 10k or half marathon at rate 20-22 spm is my ideal way to spend 40-plus minutes erging. I find it meditative and a great way to clear my head, and I always feel refreshed after. You hear people talk about the “runners high,” and it’s a real thing. When your endorphins start flowing, it’s a great feeling.

What is your proudest moment in sport? Tough question! The first thing that comes to mind is winning first place at the World Rowing Indoor Championships for the 2k in 2018 for the 30-39 lightweights. A close second would be the 30 minute world record I set this year at 8062 meters. No other lightweight woman has breached the 8k barrier in 30:00, so that’s really huge to me.

What athletes inspire you? To be perfectly honest, I don’t follow a lot of famous athletes. A lot of my inspiration comes from everyday people who are putting the work in just like I am—in their garages, in their bedrooms, their backyards. It’s super motivating to see all these other individuals who have similar goals and busy lives, and families and jobs. And yet they are still putting in the work and hitting PRs [Personal Records]. It’s inspiring.

What advice would you give other women and girls for pursuing sports? Don't ever take no for an answer. Just because someone thinks you aren’t good enough, doesn’t mean they are right! When I tried out for swimming, the coach told me no, and so I worked hard and came back the next year better than any of the other swimmers they had in my age group. When I was told I’d be going to firefighting school I had SO many men tell me that I wouldn’t make it—and then I did. I was one of the top swimmers in my Marine Combat Instructor of Water Survival class, despite being the ONLY female in our class. If you want something, go after it until you get it and don’t let anyone stop you.

What are the biggest challenges you face in your sport/training? So far the biggest challenge I’ve faced has been training alone. My husband is active duty Marine Corps so we move a lot and often don’t have much of a support system nearby. We also have four amazing little daughters so squeezing in sessions can be tricky.

How has Concept2 helped you reach your goals? Once I started really focusing on training on the Concept2 I realized I had some potential. I started taking American records last season, and a friend said to start aiming higher and get a world record. I made it my goal to grab as many world records as I could. Concept2 has helped me do that, several times over, by producing a quality machine, and providing excellent online access with their logbook and website.

What’s your favorite workout music? I usually put on Uncle Murda Pandora station that has a few different artists added to it! It really pumps you up to get a good session in.

What’s your favorite/go-to workout? When I have no planned sessions to do, I always go for a 10k rate 22 spm. It’s a nice distance, at a real smooth rate.

Anything else to add? I would add that just because you’re past your “athletic prime,” or you’re a parent, or a stay-at-home mother, or overweight, whatever the case may be, it doesn’t mean you have to give up on your goals in life. A few short years ago I never would have imagined breaking a world record. Now I’m doing it in my garage with my own four little girls watching me. It’s been an incredible and interesting journey, to say the least.

The Ukrainian 🇺🇦 LM2x win their Heat. Igor Khmara and Stanislav Kovalov have been living and training in Bulgaria t… t.co/gdwMzVCGKo @WorldRowing about 1 day 1 hour ago.