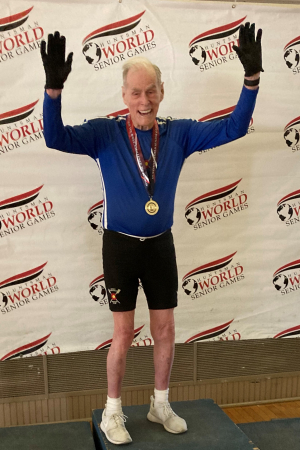 Dean Smith isn’t a stranger to owning athletic records, but he discovered his rowing prowess only later in life. At 95, he now holds the men’s lightweight age 90-99 2k world record with a time of 9:55.8. His new record shaves over 30 seconds from the previous time.

An accomplished runner, Smith only tried rowing in 2003 when his knees no longer allowed him to run. His friend and coach Tim Miskiewicz introduced the then 77-year-old Smith to rowing. As his wife, Priscilla Smith, explains, “Dean took to rowing ‘like water’ and has enjoyed the sport and competition ever since, even if, at that point, it was on a landlocked Concept2 RowErg.”

Smith’s athletic resume includes a high school mile run record and Hall of Fame recognition at both the high school (Canton, Illinois) and collegiate levels (Bradley University, Peoria, Illinois). As a masters runner, he is an eight-time US Champion in the 800m distance. Once he started indoor rowing, he experienced success at indoor races such as the CRASH-Bs. He’s won many coveted hammers (awarded to each CRASH-B age group winner) over the years.

At age 80, Smith signed up for on water rowing lessons at Rocky Mountain Rowing Club. He immediately set his sights high, declaring his goal to win a gold medal in international competition. Despite the doubt of the club veterans that he could accomplish such a lofty goal as a rookie to the sport, Smith trained hard and went on to win a gold medal in the men’s single at the FISA (now called World Rowing) Masters Championship in Princeton, New Jersey. 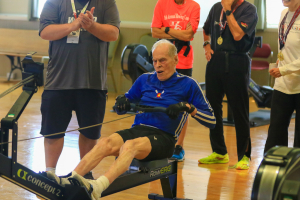 Smith rowed to his indoor 9:55.8 victory at the Huntsman World Senior Games, held in St. George, Utah, on October 15, 2021. This was the first time indoor rowing was included in the program. The Huntsman Games is an international sporting event promoting lifelong fitness for those age 50 or older. The event now includes over 34 different disciplines for athletes to compete in. In addition to the 2k, Smith won his other event, 5k (26:02.3). Rowing has even become a family affair: daughter Susan, age 65, also competed at the Huntsman Games, and won her 2k and 5k events.

While vertigo has moved Smith’s rowing career to indoor competition only, he still stays competitive and motivated with the support of the Rocky Mountain Rowing Club. At age 95, Smith takes no medications and credits a healthy diet and rowing for his good health. We look forward to seeing more strong strokes from such a successful athlete.

The 2023 World Rowing Indoor Championships are coming! Register today for the February 25th-26th event in Mississau… t.co/Zfunf8vvFH @concept2 about 4 days 13 hours ago.