December 15, 2000, 8.15 pm. Just another date, but one that changed my life forever. I picked up an innocent looking juice carton from the windscreen [windshield] of my car, wondering who’d placed it in such a strange place? It wasn’t so innocent. It was ¼ lbs of high explosive filled with shrapnel!

I’d been living in al-Khobar, Saudi Arabia, for the previous three years as a marketing executive for Coca-Cola. The bomb took most of my right hand, and the shrapnel ripped through my eyes and upper body, leaving me totally blind. I had a wife and a 10 month baby girl. I thought my life was over!

I had always played sport, been a keen rugby player and always enjoyed a challenge. I was now facing the greatest challenge of my life.

For no real reason, even during my rehab, I had started to think what I may be able to do as a way to keep fit that didn’t need the assistance of others and something that would interest me. I had used the Concept2 rowing machines in gyms when I was sighted, and whilst I thought of them as the most hideous form of torture ever invented by man, I respected them. I even had my first hand therapist make up a rigid sleeve with neoprene straps in an attempt to try and use an erg. The idea was good, but it needed a great deal of refinement and strengthening: it lasted about 500m before it stretched and became as much use as a chocolate fireguard [became extremely useless]!

I put thoughts of rowing on hold for a few years, concentrating on running, completing the Great North Run Half Marathon in Newcastle twice. But this relied heavily on a running partner who was both available and in the right frame of mind when they could train.

I needed something I could do on my own, when it suited me. My thoughts returned to the erg, and I lobbied my artificial limb consultant for a solution. They didn’t disappoint and a leather gauntlet round my right wrist and a solid C-shaped hook with a flexible joint was just the job! By this time, I had mastered the computer using a screen reader (all text is read out to me with a synthetic voice) and the search was on for a suitable machine.

Obviously the choice was elementary: the Concept2 Model D Indoor Rower, which was relatively new in 2004/5. But it was not just the reputation of the machine that made the choice so easy, it was the incredibly informative and easy to use web site (concept2.co.uk) that played a big role. Reading the feats and results of the late great ex-England rugby player Andy Ripley, the impossible records of Rob Waddell and the unstoppable pace of “Nick Big Bird Fleming,” who is the same age as me, all made me excited to be joining an incredible team of enthusiasts. Andy Ripley was once quoted as saying that he wishes he’d found the erg earlier in his career as he felt he was fitter then he had ever been during his rugby playing career. That’s some endorsement!

It wasn’t long before a shiny, sparkly new Model D was sitting in my garage just waiting for me to strap on my “Captain Cook Hook” and give it a good beasting! Everything worked, it felt right, the hook worked, I didn’t think I lost much power from the adaptation, but something was missing… "How far have I rowed,” “What’s the split,” “What’s the stroke rate" were all questions I needed someone else to answer. I could set myself up, I could set an alarm for the time, but I didn’t know how well or badly I’d done until I got some eyes to scope the Performance Monitor. I wasn’t independent!

Independence is probably the biggest thing I missed. Always having people helping you in unfamiliar places, telling you where things are, what’s happening on the TV, helping you round the gym. The list is endless. The computer has been such a huge part of my life since losing my sight, simply because I can do everything on my own, I don’t have to plan what I want to do, I can go anywhere I want on a whim!

For that very reason I lost interest in the erg. I tried, but I got bored, there was no feedback, no milestones, no points of interest; it was just hard and uninteresting. Everyone knows how tedious some sessions can get, the rhythmic whir of the fan, the burning muscles, "just another 1500m." You try the Fish Game. If you’re lucky, you’ve got RowPro installed, and if you’re even luckier, you’ve got it wired up to the Net and "Wolfgang" from Germany is getting a right royal thrashing! I had none of that, not even my distance, time and splits. What was the point? I read some blogs online, the training stats, the good sessions and the bad. But I just couldn’t equate my performance to anyone’s. I just didn’t feel part of the crew!

The erg slowly became part of the general clutter in the garage. It got shunted against a wall, boxes got piled on its seat, dust settled thick on its rail. And in many ways I joined it. I grew more and more lethargic, my shoulders narrowed and my stomach went south. So did my mood, my attitude, my general demeanor, and I was possibly not a good person to be around. I look back now and realiZe that I was probably suffering from mild depression. I didn’t have any personal goals, I just thought of getting through the day, week, month, year! I just didn’t have any self worth.

Some four years later, one day in 2008, I was idly looking through the Concept2 website at the adaptive classifications, when I came across something called ErgChatter. It claimed to be a piece of software that would allow blind or visually impaired people to use their computer to get a read out of the Performance Monitor. I was excited, I downloaded it, followed the detailed instructions for updating the firmware on the PM3, connected the laptop to the monitor, started ErgChatter and started to row!

From that moment on my life changed for the better. Some of you will say, "how did reading the PM3 change his life?" Believe me it did. Now I could participate individually. I didn’t need anyone to tell me how I was doing. I could log my times and chart my progress. I joined team "Sub7" and got online with them. I could read other people's training programs and follow them or at least compare my efforts to theirs. I now felt part of the crew!

Just being able to read the simple stats, was like a sighted person finding themselves two lengths ahead of Sir Steve Redgrave with 200m left to go on RowPro online! Ridiculous but true.

ErgChatter is basic, but you can get all the stats you need including watts, calories and heart rate. It even allows you to configure what stats are announced and set the drag. I can chat online and share my training sessions, and no one realizes that I’m any different to them. It makes me feel inclusive.

We all know that Concept2 make the best ergs in the world. The quality and finish are second to none. In short, their gear is awesome. But the company is more than that. The team has made me feel that I am as important as the next able bodied person. Whenever I’ve had an issue, they’ve been there to help, personally (Scott you know who you are)! Email them and they’ll get back to you, but their numbers are there in case you just want to give them a call. They have embraced adaptive rowing, and I know that there are a lot of paraplegic rowers doing some incredible things. You can sort rankings on the site by adaptive class. I was 11th in the world for LTA overall 2000m last year, something I’m determined to better this year!

Concept2 should be applauded for their efforts in supporting the needs of disabled people—no other manufacturer does it as far as I am aware. But there again, there isn’t another fitness company like Concept2! 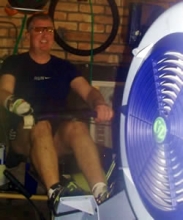