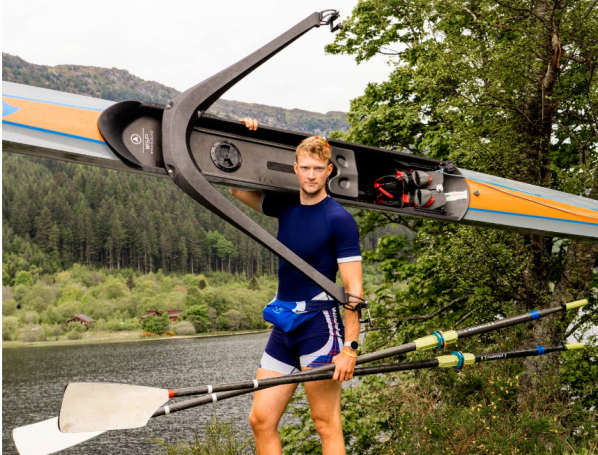 Just yam on it—that’s how Cameron Buchan and his team at the Leander Club in Henley, the United Kingdom, encouraged each other. They found the saying while looking at a rowing subreddit, and as Cam says, "it just stuck".

It went on to become Cam’s tagline, inspiration for his website and eventually the name of his Great Dane. Cam’s online success has mostly been through his YouTube channel where he posts videos of everything from training, to how to do a 2k, to his rowing adventures around Europe and more. Not to mention the occasional appearance of his adorable dog, Yam.

“So, I went to a prep school in the US for another year of high school after I finished high school in Scotland, to play basketball there.”

Cam’s goal was to play basketball at a US university, but due to a change in the NCAA recruiting rules for international students, his recruiting pathway became muddled. While it was getting sorted out, Cam decided to look for a spring sport to keep training with a team, and it was no surprise that the rowing coach contacted him.

“I tried rowing, and I just really enjoyed it—the people who were rowing, the actual sport of rowing itself and everything around it. The coach asked me within a few weeks if I wanted to go to school for basketball or rowing,” Cam says.

Cam met the rowing coach at Northeastern University in Boston and ended up rowing there for four years. During the summer holidays, he reached out to the coaches in the UK and was able to compete twice at the under-23 level. After graduating, Cam made the British national squad and raced at the 2017 World Rowing Championships, but a few months later things started to fall apart.

“I would have really good performances and then really bad ones. I couldn't be consistent,” Cam says. “After a 2k performance that was 20 seconds off, I asked to have my blood checked.”

Cam had a bad case of glandular fever, or mononucleosis, and the doctor ordered him to stop training.

“I spent the first month watching all of Netflix and YouTube just to do something,” Cam chuckles. But once he was “watched-out”, Cam remembered that he had taken quite a bit of footage during his training years. He decided to start editing videos.

“I made a few videos of the content I had. I wasn't allowed to leave the house yet, or train yet, so some of the first videos are a little weird,” he laughs. As Cam got back into training, he started documenting his journey back to fitness. His YouTube channel now has more than 30,000 subscribers.

The adventure has taken Cam all over Europe, where he has rowed with and learned from some of the world’s top rowers, including two-time Olympic Champions and brothers Valent and Martin Sinkovic from Croatia.

“Watching the Sinkovic brothers train, every session was a chance to change little things,” Cam explains. “It wasn't as if they were sitting back and thinking they were really good. They were always looking for small improvements.”

Cam has tried to apply his learnings to his own training and to the people he coaches through Yamsquad. His number one tip for people who are reticent to get on the rowing machine is to start slow.

“When you go on the rowing machine, it doesn't have to be a flat-out effort. A lot of people struggle because they associate the machine with pain or running out of breath. But the machine doesn't always have to be like that. I try to give people the opportunity to build up a low-intensity block. Get used to the idea of not panicking to sit on the machine,” he says.

Coaching and the online community are a source of energy and support for Cam.

“I get comments from people and it’s a little positive boost. If people watched my videos and it helped them, that gives me a boost,” he says. He hopes that the circle of support continues to grow and that rowers can have a place to relate to one another.

As for Cam’s future, he’s still training hard and he’s recently completed the time trial for selection to the GB Rowing Team. But he also knows that no matter what happens with his on water rowing career, he’s got the Yamsquad to fall back on.

The 2023 World Rowing Indoor Championships are coming! Register today for the February 25th-26th event in Mississau… t.co/Zfunf8vvFH @concept2 about 2 days 12 hours ago.