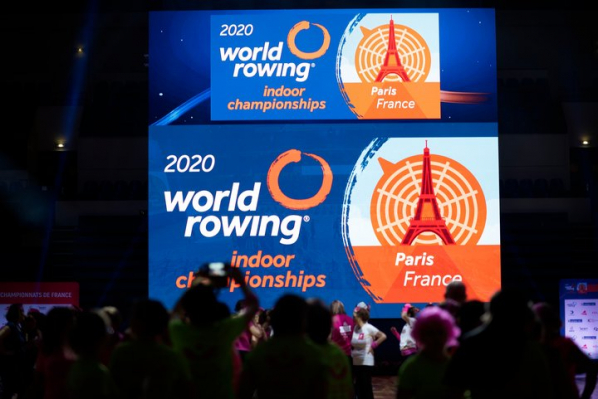 The third World Rowing Indoor Championships took place in Paris, France, February 7–8. This was the first time the championships have been held outside of North America, and everybody involved made sure to put on the best event possible to show what Europe can bring to the party.

In the Men’s Open race, Great Britain’s Phil Clapp was the heavy favorite. He shares the world record for the fastest 500m with two other athletes; all three have rowed 1:10.5. Although he wasn’t able to match that in Paris, he did win the event with a time of 1:12.3. 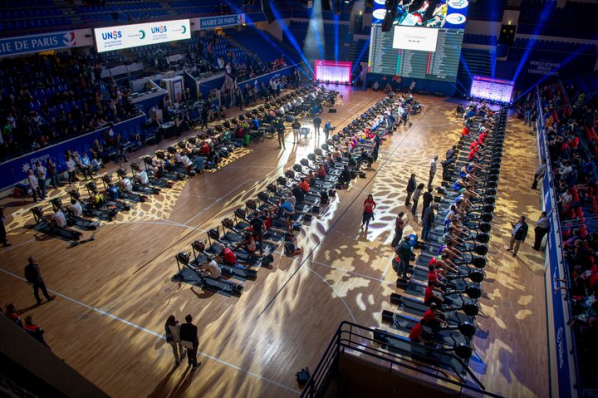 Saturday saw the 2000m showdowns, and the stadium was busy from start to finish with spectators, competitors and exhibitors. Olena Buryak clearly had to dig a bit deeper than usual to win the Women’s Open 2000m after winning the previous day’s 500m race. She was visibly encouraging herself; she still managed to celebrate her 32nd birthday in style, winning in 6:31.7.

In the Men’s Open, the favorite coming in was Alexander Vyazovkin of Russia, who had set a new Russian record of 5:40.8 just a few weeks before. He was pushed hard all the way by Barnabe Delarze of the Swiss national team, before eventually emerging victorious in 5:43.5. Delarze was second in 5:45.2 and France’s Matthieu Androdias rounded out the medals with 5:47.5.

The noisiest race of the day was probably in the Men’s Open Lightweight division, as French National Team Member Pierre Houin took World Championship gold to go with the Olympic gold he won in 2016. He was neck-and-neck with Italy’s Martino Goretti for the early part of the race, before separating himself off to win in a time of 6:06.5. Thibault Colard of France put together a good second half of the race to nip in front of Goretti to take silver in 6:10.0, while the Italian was third in 6:11.8.

The Women’s Open Lightweight race was also won by a home favorite as Laura Tarantola won in 7:07.3, nearly 15 seconds ahead of her fellow countrywoman Marie Joannes. Jilly Tovey took bronze to go with her gold in the 500m.

As ever, the master’s races provided plenty of entertainment, with some US athletes doing themselves proud. Andy Benko dominated the Men’s 50-54 race from start to finish for the third year running, winning in a time of 6:07.2, over 11 seconds ahead of Jorge Palacios of Peru. Another equally dominant US winner was John Allen, who won the Men’s 75-79 Lightweight race in 8:31.4.

The oldest racer of the day was Georges Basse of France, who took gold in the Men’s 90-94 category in a time of 11:11.7, clapped home by the crowd.

One of the most noteworthy performances was that of Gerard Le Fohic. Already a French record holder for the 60-64 Lightweight category, he set a new 65-69 Lightweight world record with a time of 6:51.0, beating a mark that has stood since 2016.

It was in the para races that the records really fell, however, with a remarkable eleven new 2000m records:

The day finished off with relay races. The French race has a unique take on relay racing, whereby team members must run to the machine with a baton, which they must put in a bucket behind the machine before they row their leg. They then have to hand over their baton to their teammate before swapping. With four people on a team, and each person completing two 250m legs, it made for fast and frenetic fun to round off the day.

If you missed out, you can watch it all again on World Rowing’s YouTube Channel. Full results can be found on the World Rowing event page.

Just prior to the event, Concept2 and World Rowing announced that they were teaming up for another four years, joining forces to again present the 2021-2024 annual championships. Bids for these dates have now been received and hopefully the dates and venues for the next four years will be confirmed in the coming months.

I’m getting ready for the 24 hour row to support mental fitness. This one is happening October 30 & 31 in Australia… t.co/oR999CTc1P @RealHughJackman about 2 days 21 hours ago.