Three Bodies, One Brain: The Unifying Power of the PM5 | Concept2 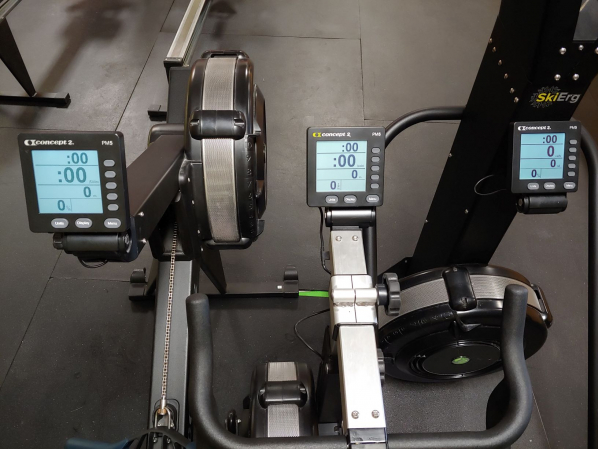 Besides the flywheel, awesome engineering and recognizable logo, the latest generation of the three Concept2 ergs have another major thing in common: The PM5 performance monitor. This black box of numbers is a very powerful tool, and for those of you who have two or three ergs at your disposal, the PM5 can be a unifying force, bringing consistent, measurable data across multiple machines.

While the PM5 units on each erg are identical in appearance, there are a few software (technically called "firmware") tweaks that you'll see within the display that differentiate the units. First you'll see Just Row, Just Ski, and Just Ride in the Main Menu. After that, the BikeErg has a pace measurement that uses 1000 meters (and rpm) instead of the 500 meters (and spm) used on the RowErg or SkiErg (more on that later). Then under the Games menu you will see the long-time favorite Fish Game absent from the BikeErg as it just does not work with the steadier power curve of that rotational movement. And for us non-engineering types, that's about it!

So what's the same?

Everything else. All the menus, workout programming, utilities, etc. are identical, making the navigation, information and programming a cinch once you have it down on one machine. For individual owners, it's nice to be able to see the same screen layouts from machine to machine, and for those of us that are gym owners or trainers, this is even more convenient since we only have to teach the interface once. Our members are allowed to focus on their workout and not how to navigate different menu systems and button sequences.

So what really matters?

The biggest consistency advantage that the PM5 carries across all three ergs are the units of measurement, with the aforementioned 1000m split on the BikeErg as a slight wrinkle. So this means that if you commonly utilize watts while you use one erg, you will be able to produce and observe very similar numbers on the other two. The same goes for calories per hour, and with the doubling of the split distance, your pace will also be fairly consistent from erg to erg.

And here is where things get cool. The Concept2 ergs are designed to allow your body to do work. Another term for "doing work" is "producing power," and the PM5 is a device that measures power production. With consistent measurements being taken by the PM5 we start to recognize that the three movement patterns we use—rowing, biking and skiing—produce very similar amounts of power. Not identical, but similar. So if you have a workout that sets forth a certain number of calories to be achieved, that same number can be targeted across all three ergs as it will take similar amounts of time to accomplish those calories. If you are using watts as a unit of measurement, your average wattage will again be similar. And then when going for distance, after doing the very simple doubling of your target on the BikeErg, your meters will all be similar as well. For an example of that last scenario, if you want to create a workout that has shorter, sprint-like intervals, you could program the RowErg and the SkiErg for a 500 meter distance, and the BikeErg for 1000 meters.

Well, now the fun begins! With two or three ergs at your disposal it becomes really easy to design and perform workouts using all of the machines together in concert. The three different machines become "vehicles" to utilize in a single race, allowing you to jump from one to the next mid-workout, chasing the same finish line but working your body in different ways. An interval session, tempo effort, or steady state workout ups its overall effectiveness as you distribute the power production across a wider spectrum of muscle groups, thus getting a more well-rounded and effective workout. And all the while you are watching that same black box—the PM5—providing you with the real-time measurement of your power output using consistent units of measurement, displayed in a consistent manner.

All hail the PM5! Let the multi-erg workouts commence!

@luckie_reubs Hello, this is not presently a feature. At this time a USB connection is required. @concept2 about 5 hours 15 min ago.