The Green Racing Project (GRP) is an Olympic development cross-country ski, biathlon and rowing program based at the Craftsbury Outdoor Center in Craftsbury, Vermont. GRP athletes train year-round and race throughout the country, often earning opportunities to represent the US in international competition. Along the way, the athletes live as sustainably as they can, take care of their environment, and give back to their community. The following blog was posted recently on the GRP Ski blog. We thought you might be interested in some of the ways they use the Concept2 SkiErg in their training and testing. 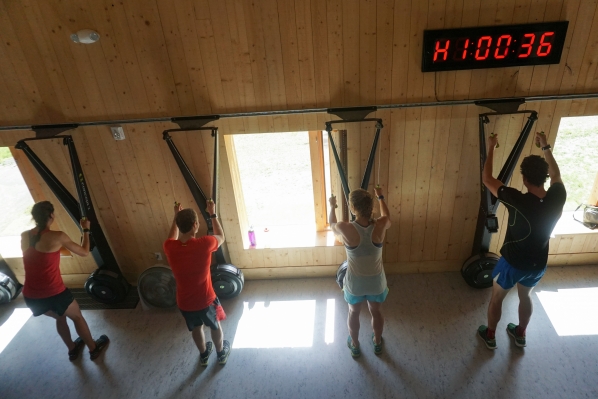 The Craftsbury Green Racing Project conducted extensive physical testing in May. The tests included the Canadian Strength Test, an uphill running time trial up local Elmore Mountain, a VO2 Max Test using a Concept2 SkiErg, and a MOXY Test using a Concept2 SkiErg. These tests give us a very solid baseline of information that we plan to build on throughout the training season. “Hit the ground running” is definitely a good phrase used to describe the Craftsbury GRP training this year. This hard effort and high intensity testing allows for a shorter “break-in” period of sometimes lackluster training in late spring and early summer that plague some Nordic skiers out there. It also increases the early focus, while providing individual goals for each skier to get to by the next testing block.

The Canadian Strength Test is a common standard for Nordic skiers to use. For those of you who are not familiar with the test, it is very easy to replicate if you choose to add it in your own training program to see if you are getting stronger over time. The test is as follows:

The final score is calculated by adding up all of the numbers as they are except for pull-ups: multiply your number of pull-ups by 3.

Most Nordic skiers are familiar with an uphill running time trial. Nordies love to just get in that pain cave and test how mentally and physically strong they are, so what better way than running uphill as hard as possible? The Craftsbury team uses local Elmore Mountain, which is more than adequate for searching the depths of the pain cave. As calculated by a Polar V800 training watch, the uphill running time trial is 3.03km long and has 372 meters of elevation gain. It takes between 16 minutes to 23 minutes to complete depending on the age and ability of the athlete. The first half of the run is on a dirt road, while the second half is on a hiking trail. The last few pitches are exceptionally steep, making most runners debate about doing a fast hike or continuing to run. Sometimes putting pride aside and hiking actually is faster and less exhausting.

The VO2 max test was done in our coaches' testing laboratory on a Concept2 SkiErg with the PM5 monitor. We used the pace function of the SkiErg to do a “step test” for each athlete. With a heart rate monitor on, breathing mask to calculate oxygen intake, and muscle oxygen saturation monitors taped on, the athletes started at an easy pace and every 90 seconds increased the intensity. For example, start at 2:20/500m pace, then after 90 seconds go down to 2:10, then 2:00, then 1:55, then 1:50, etc until the pace cannot be maintained. This will create a max effort and thus max VO2 result. Here is a link to the VO2 max test for one of our athletes. 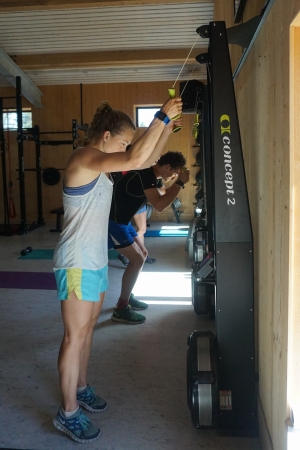 The MOXY test is also done with a Concept2 SkiErg with a PM5 monitor. With heart rate monitor, breathing mask, and MOXY monitors taped on, the athletes performed three 4-minute hard intervals with only 1 minute of rest in between each one. The pace is supposed to be relatively consistent throughout the test, so the first interval felt ok, but the third 4-minute interval was extremely challenging to maintain. The MOXY monitors the oxygen saturation in the muscles. The test is supposed to measure how much oxygen is delivered to the muscles, and how well the muscles utilize that oxygen. A VO2 max was also taken from this test. Here is the video of the test.

Readers: we know most of you won't have access to all of these testing methods, but the important thing is to use the tools that you have to be sure that your training is working. Both the SkiErg and the indoor rower offer a great way to monitor your training progress.

Saw that Biden can't bring his Peloton into the White House. Bummer. You know what cost half as much, doesn't have… t.co/cFTvipoBSq @GabeNotDave about 22 hours 17 min ago.