In the last four years, Australian Kate Hilliard has become a SkiErg sensation by claiming more than a half-dozen world records. Now, her biggest opponent is herself. At the 2021 SkiErg Sprints Kate smashed her own 1000-meter record, finishing in a time of 3:18.5. 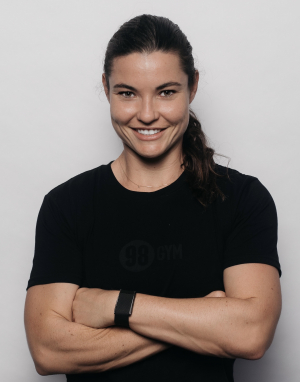 This relative newcomer to the SkiErg was formerly a swimmer and was working as a swim coach when she happened across a SkiErg. It was part of an inter-gym competition in which she was participating.

“It was a relay,” Kate says. “You had to do 20 strokes and then change. When they told me, I said, ‘what’s a stroke?’ But it was fun and hard, I really liked it. I think being good at the SkiErg comes from being a good swimmer - you have a fairly big upper body and big huge lats.”

Through the competition, Kate also got to know the 98 Gym, where she started training and where her relationship with the SkiErg continued to develop. During a ‘test of fitness’ day, Kate did a 2-kilometer test on the SkiErg. Part-way through, the owner of the gym dropped a slip of paper in front of her. It read: 7:30.

Kate tried to speed up, following his instructions to aim for 7:30. It was only when she finished that Kate realized 7:30 was the world record; she had just broken it.

“That was the first time I thought that this could be my thing,” Kate says.

Kate’s training progressed through her involvement at the 98 Gym. The 98 Gym follows a CrossFit-like program, without the gymnastic element. It combines strength training, with cardiovascular training through running, rowing, SkiErg and biking. It also builds a community through fostering a true sense of teamwork.

“The owner and founder used to play rugby professionally when he lived in Leeds,” Kate explains. “He moved to Australia and wanted to replicate what it was to be on a team, but not by building an actual team.” 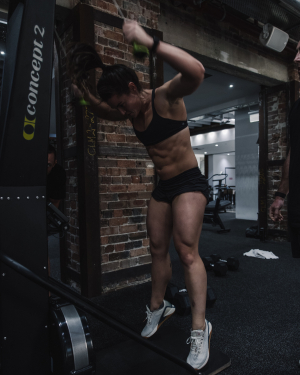 Because of Kate’s swim coach schedule, she was often at the gym during the day. She began hanging around with the other trainers and trying to put in more time at the gym. While she was already a qualified coach and trainer, Kate thought it would be tough to do so at 98 Gym. She says the trainers at 98 Gym are ‘beasts.’

“It was the first round of Covid when we got locked down the first time, things changed for me work-wise. Where I was coaching swimming wouldn't offer me any work and the gym could, which was really incredible,” Kate says.

As a 98 Gym trainer she relies on her ability to connect with people.

“You can have all the knowledge in the world, but if you can't understand or empathize or connect with people somehow, it can be a detriment to your coaching. So, I hope I can connect to the people and bring out a willingness to have a good dig, suffer a little bit,” she says.

Kate works out every day with the other trainers at 98 Gym. But she dedicates only one training session a week to the SkiErg. Having broken several world records, her training program apparently works, but Kate is also not easily satisfied.

“The age category records don’t count,” she says. “So, there's a couple of them, but I want the overall ones.”

She is most proud, however, of her under-seven ability.

So, what is this powerhouse’s favorite workout on the SkiErg?

Kate plans to keep knocking down records, and definitely plans to stay at the 98 Gym.

“The gym is very performance based, but looking at your own highest potential, not to compare yourself to others. It's very supportive and very challenging, but in a very safe way,” Kate says.