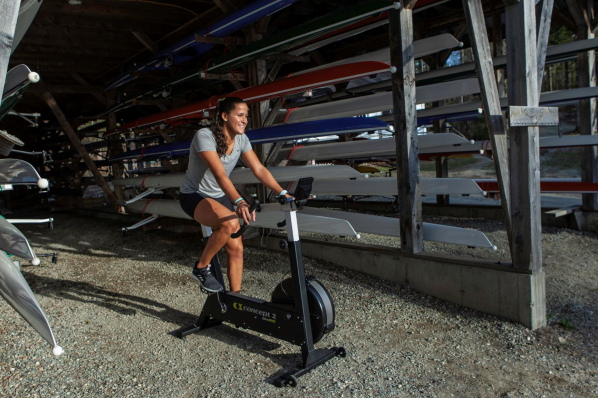 Any injury rehabilitation should be performed under the supervision of an appropriate medical professional. The information here is not provided as medical or rehabilitation advice.

Injury can sideline even the most well-trained athletes. Depending on the type of injury, the BikeErg can provide an alternative workout for rowing athletes. The familiar Performance Monitor on the BikeErg provides similar training feedback and workout options as the RowErg, which allows for continuity of training goals and measurement. Some coaches have even held “erg tests” for injured athletes on the BikeErg, allowing individuals to continue to train side by side with teammates. Athletes and coaches share with us how they have used (or are using) the Concept2 BikeErg as part of a rehabilitation program.

At the National Team level, Coach Tom Terhaar had an athlete working out on the BikeErg to maintain fitness during a setback in her rowing training. "The two biggest benefits were an easier transition back to the rowing erg and a more consistent training tool than all other bikes that we’ve used" he explains. "The athletes lose less power in their legs if they train on the BikeErg. As for consistency, the athlete knows that the splits are the same across all C2 machines and they come close to resembling the numbers used for rowing erg training. Usually it takes a few weeks to get back in rowing shape after a setback. With the BikeErg it seems to take almost no time at all. They are able to pull similar numbers to pre-rx numbers almost immediately."

On the Performance Monitor, the same wattage required to row a given pace per 500m on the indoor rower is the same wattage required to hit the same pace (per 1000m) on the BikeErg. As a result, pace numbers will look familiar. A college athlete recovering from a rib injury explained that, “The fact that [the BikeErg Performance Monitor] gives me accurate splits means I have been able to keep my workouts identical to my teammates' on the ergs/water and this has helped me maintain my fitness. For both steady state and high rates, I think my splits on the bike are about 4-6 splits lower than on the erg (but I’m not complaining about this).” Cycling requires less technique than rowing, which may account to some variation in outputs.

An injured master’s rower at Cambridge Boat Club gave similar feedback: “I liked it because of the direct correlation that could be made to working on the [row] erg. The way that the Displays were set up was very useful.” After rotator cuff surgery, this athlete used the BikeErg for long steady state workouts (15-30k) to keep pressure off his shoulder. Throughout winter, he translated his rowing workout distances (5k) into comparable cycling workout distances (10k). His conclusion: “My 10k biking pieces were generally within a minute or so of the preceding 5k [row] erg piece.” A fellow boathouse member commented that, “The BikeErg is a useful addition. Having two is far better than one. And being able to see out the window and look over the river is a huge bonus.”

We’re always hopeful that athletes can return swiftly back to rowing on the river. For those times of rehab and recovery, the BikeErg can be a welcomed way to stay fit without missing an erg session.

We are closed for the long Thanksgiving weekend. We want our hard working staff to be able to spend time with thei… t.co/dHaApuGS0e @concept2 about 4 days 17 hours ago.