The 2016 CrossFit Games was an exciting event for competitors and Concept2 CTS for a variety of reasons. Not only was it the 10th anniversary of the CrossFit Games but also the 10th anniversary of Concept2 CTS’ participation. Athletes saw their week start with a surprise trip back to original Games location, “The Ranch”, in Aromas, California, and were also introduced to a new element from Concept2, the SkiErg. 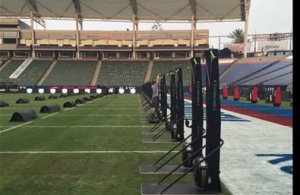 Prepping the SkiErgs for competition.

Concept2 saw both the Model D Indoor Rower and the SkiErg featured in an event on both the team side, “Triple Double”, and the individual side, “The Rope Chipper”. CrossFit Games team competitors used the SkiErg and indoor rower for calorie workouts, while the individuals had a distance component. Olympian (Sailing) Anna Tunnecliffe won the event on the women’s individual side, while rookie Brent Fikowski took the event on the men’s side. The team side was dominated by reigning champions, CrossFit Mayhem Freedom. 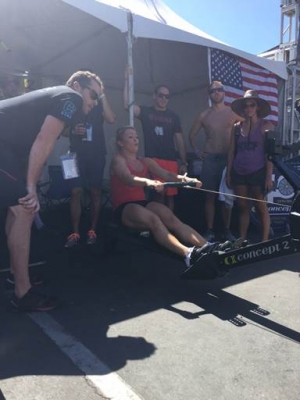 Fittest Fan challenge. 500 meters all out!

The Concept2 booth was busy throughout the weekend as the fleet of the Model D, Model E and SkiErgs were there for spectators to demo. The CrossFit Games hosted a Fittest Fan challenge in which individuals had to complete a 500m row at the Concept2 CTS booth, as well participate in other events during Games week for a chance to collect prizes. In the hot temperatures, the fastest times were 1:18.3 on the men’s side and 1:34.5 on the women’s side.

In the trend of new and exciting, the CrossFit Rowing trainers were asked to demo not only the indoor rower, but the SkiErg, as well. During the Saturday seminar, the demo tent was packed as the trainers gave instructions, provided technique cues and eventually led a team workout utilizing both pieces of equipment and burpees.

Vermont’s very own Mathew Fraser took the podium for men, and reigning champ Katrin Davidsdottir defended her crown for the women. The week saw a lot of intense action on the competition floor, a very packed and fun Vendor Village, and the continued positive atmosphere associated with the CrossFit Games. We are proud and thankful we had this opportunity to showcase our products at the 2016 CrossFit Games.

Concept2 will be closed for July 4th. We wish everyone a safe holiday. Custom Erg for @bigfish_foundation fundrais… t.co/MQqmyV0Ipe @concept2 about 14 hours 1 min ago.