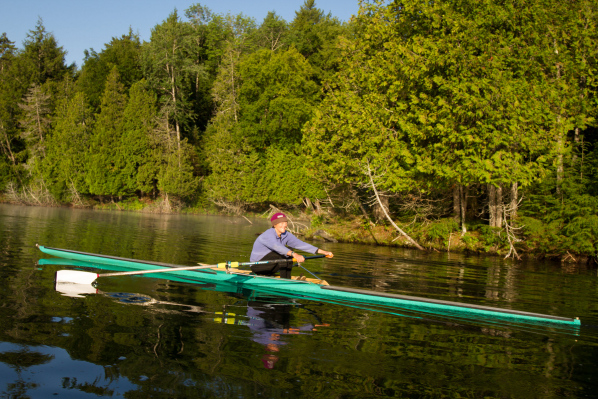 Judy Geer: Judy Geer learned to row in college and quickly realized she wouldn't be able to just stop when she graduated. So she kept training, and made the US National Rowing Team in the 1976 Olympics. She continued to represent the US at World Championships for the next eight years, including both Olympics—the Moscow 1980 boycott, and Los Angeles in 1984. She also spent a couple years coaching the Dartmouth women's rowing team in the late 70s, and was a guest sculling coach at the Craftsbury Outdoor Center in Vermont for many years. Once she had kids, her coaching shifted to kids' sports, from soccer to running to Nordic Skiing. While all her children are accomplished athletes—including two Olympic biathletes—Judy and her husband Dick Dreissigacker have reminded them to enjoy the process. Success will come from doing what you love and doing it well.

Have you always been an athlete? What was your first sport, and how did you get started? There weren’t that many sports available to, and considered suitable for, girls, when I was growing up. But luckily I found one—swimming. I started swimming and racing for my small club team in the summers, and got into it enough to join a winter team soon after. I raced all the way through high school, and some in college as well, while also starting to pick up rowing.

Who has been an influential coach in your career? I’ve had a number of wonderful coaches who provided such good support that I never really stopped to think that I shouldn’t be doing this sport because I was a girl. They just pushed me as an athlete trying to achieve new PRs and steady improvement. But probably the most influential coach was the women’s coach at Dartmouth College, once we were assigned a coach of our own: Bill Pickard, a former Dartmouth rower who was also in the business school at the time. He was the one who let me train with the team even after I’d graduated and had the audacity to tell me, and then convince me, that I should move to Boston and try out for the 1976 Olympic Team. I thought he was crazy, but I did this, and I made the team!

The 1976 US Women’s Olympic Four with Coxswain, preparing to launch at the Montreal Olympics, with Judy in the bow seat.

Which athletes inspire you and why? Really every athlete who sets goals and works to achieve them—whether kids, seniors, adaptive—is inspiring to me.

What/who got you into using Concept2 equipment. How has Concept2 helped you reach your goals? Back in 1980 and 1981, I was rowing the double with my sister on the US team. Our coach, Larry Gluckman, wanted us to try out some new sculls being made by the Dreissigacker brothers in Vermont. So we headed up to Shadow Lake to give them a try, and we started using them. On the erg side, we were training in Hanover, New Hampshire, where the river was frozen for a long winter, and ergs were a training necessity. The ergs of the time were terrible and suddenly this new erg appeared—smoother, quieter, cheaper, more like sculling. Quite a treat. Then in 1983, when I finished my Masters in Engineering, I joined Concept2—and in 1985, I joined the family when I married Dick Dreissigacker [Concept2 Founder].

What are the biggest challenges you face in your sport/training? Well, at this point, it’s all about “turning back the hands of time!” If I can not get too much slower each year, it’s a victory!

What is your proudest moment in sport? Oh, that’s hard to say. I never won a World Championship or Olympic medal. I did win a number of Head Of The Charles Regattas, which was always satisfying. I’ve had proud moments relative to my kids, for their best biathlon races. I love the fact that they have all become athletes, too.

What advice would you give other women and girls for pursuing sports? Definitely pursue sports! Help the girls and women in your life to find the sports they enjoy. Don’t let anyone tell them they shouldn’t be doing sports. Get their peers involved, too. Make it what everyone does. Help clear hurdles of cost and access so that more kids everywhere, both girls and boys, can benefit from the healthy lifestyle and lasting life lessons that sport provides.

What is your favorite workout on a Concept2 product (and why)? I’ve been really enjoying multi-erg workouts lately. I’m lucky enough to have access to all three ergs, so I like to rotate from row to ski to bike. Sometimes I do the same distance on each erg. Other times I start with 10 minues on the first erg, 9 minutes on the second erg, 8 minutes on the third erg, 7 minutes back on the first erg, etc... all the way down to 1 minute, for at total of 55 minutes.

Other thoughts to share? I have been luckier than some in my history as a female athlete. I have had supportive coaches, and have been guided by my own enjoyment of what I was doing. I have been on inaugural women’s teams and it was most always a positive experience. I felt welcome, even if the equipment was hand-me-downs and the coach wasn’t paid very well. And things gradually improved. One of the more negative experiences I had was being among the first women to row at Royal Henley Regatta. They invited four doubles, including me and my sister. But I felt totally unwelcome the whole time. It felt like they only invited us because they felt pressure to do so, but didn’t really want us there, and looked down their noses at us. That women should be wearing rowing trou...? Perish the thought.

I’ve also had the pleasure of watching my two daughters become athletes: successful high school athletes, recruited college athletes (one in rowing, one is skiing), and then Olympians in Biathlon.

We are closed for the long Thanksgiving weekend. We want our hard working staff to be able to spend time with thei… t.co/dHaApuGS0e @concept2 about 4 days 18 hours ago.