The 2022 NoBull CrossFit Games has come to a close and Concept2 was proud to be a part of it. The CrossFit Games are the culmination of a series of CrossFit fitness events where top athletes compete and then advance to the Games. There, the competitors engage in a series of events unknown to them until right before the event begins. Concept2 was well represented throughout the 5-day competition, and was involved in a series of ‘firsts’ in format, inclusion and equipment.

The athletes competing in team competition were surprised by the use of the Concept2 Slide—something never seen before in the CrossFit Games. Using the Concept2 RowErg on Slides mimics on water rowing, and results in a quicker catch and faster stroke rate. Using Slides as a pair requires impeccable timing for efficiency.

The Slides were introduced shortly before the event began and no practice was permitted. The 4-person teams were split into same gender pairs and had to row in a linked Slide pair for 500 meters. 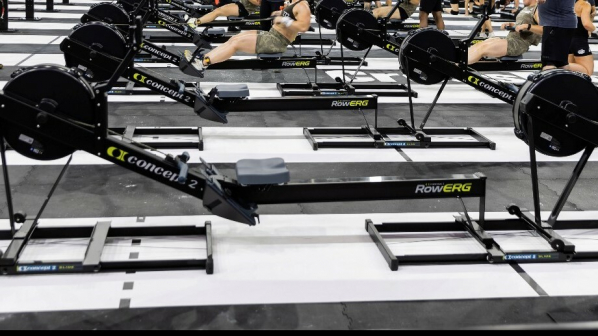 An exciting first for all athletes across each division was the workout Rinse 'N' Repeat. All adaptive, age group, elite individual and team athletes had to complete the same workout with the same standards—the first time the same standards and workout parameters have applied across all divisions. Every athlete started by swimming 50 meters in a pool, and completing eight Calories on the Concept2 SkiErg within two minutes. The following rounds included a 50 meter swim, with an increase of two calories per round through the first six rounds. The final two rounds were for max calories on the SkiErg. If at any point in the workout the athlete was unable to complete the swim or the SkiErg Cals they were eliminated. Concept2's ErgRace system was utilized to run and score this event. 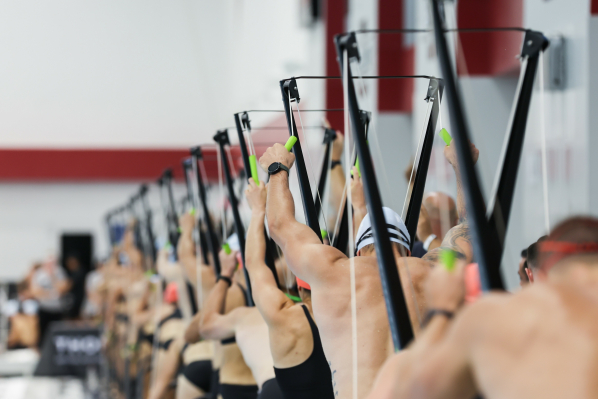 The final event of the CrossFit Games for the elite individual men and women was a more challenging version of the classic workout Jackie, typically a 1000 meter row, 50 barbell thrusters (45 lbs for men, 35 lbs for women), and 30 pull-ups for time. The Jackie Pro workout saw a heavier weight on the thrusters (95 lbs for men and 65 lbs for women), the pull-ups changed to bar muscle-ups and the 1000 meter row had to be completed in 3:15 minutes for the men and 3:40 minutes for the Women. This is the first time athletes had seen a pace/time cap for an Erg in an event. The required pace to hold for men was 1:37.5/500m and 1:50/500m for women. The performance monitor was set up so that no projected finish was visible, so monitoring every stroke was imperative for each athlete. Athletes who were not able to complete the 1000 meters on the RowErg within the time allotted were eliminated from the workout and did not move on to the next two elements. 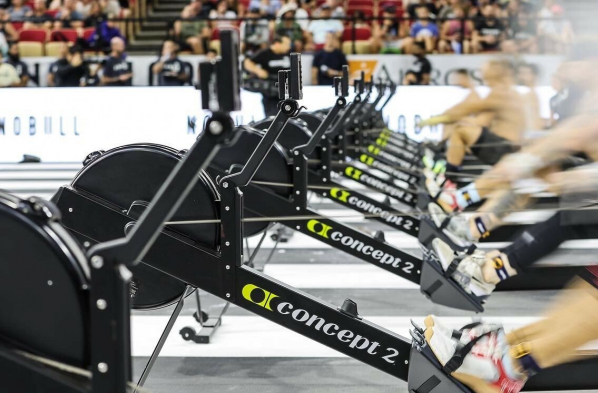 Huge congratulations to each and every athlete who competed at the Games! The power, strength and determination displayed in all the events was awe-inspiring. Check out the full NOBULLCrossFit Games results and athlete bios.

Concept2 is proud to have been a part of the CrossFit Games since its inception in 2007. Our machines have withstood the test of time and the rigorous use by athletes all over the world, and the Performance Monitor ensures reliable, comparable results. Durability and reliability—a winning combination for not just CrossFit athletes, but all types of athletes, no matter your fitness goals!

@luckie_reubs Hello, this is not presently a feature. At this time a USB connection is required. @concept2 about 3 hours 21 min ago.