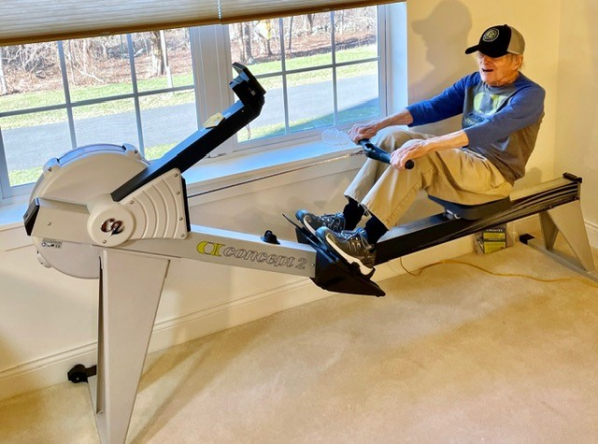 “During the pandemic I’ve been rowing every single day for at least 20-30 minutes, and it’s kept me healthy and sane during the lockdown. It’s one of the best exercises you can do when you’re stuck indoors. I have it set up by a window, and I don’t listen to audio while I’m rowing. It’s such a pleasure to row that I just look out the window and get my best thinking done while rowing on my Concept2.”

Don started rowing on water in New Haven, Connecticut, during the Great Depression. “I grew up in the Morris Cove area on the east side of New Haven, and there wasn’t much for the neighborhood kids to do during the Depression years except hang around at the local boatyard. The Boy Scouts were big in those days and an old Norwegian sailmaker at the boatyard started a Sea Scouts group for us kids, so we spent lots of time out on the water. With no outboard motors at the time, we had to row everywhere.”

In summer, Don still rows on the Great Salt Pond on Block Island, Rhode Island. These days, he rows a Whitehall pulling boat. “It's a classic rowing boat design from the turn of the century—the last century,” he explains with some humor.

Before the pandemic, Don occasionally used the indoor rowing machines at athletic clubs. He started rowing indoors at the suggestion of his friend, a former competitive rower, Jane Musky. “Jane recommended the Concept2 as the best design for people who really know how to row. I bought one to use for winter training and have been hooked on it ever since. Once you’ve used it, it’s contagious; so far two other friends have tried mine and then purchased one for themselves, but they’re only about half my age.”

Don uses his “thinking time” on the Concept2 RowErg to consider new ways to combat climate change. “Currently I’m working with several organizations in Connecticut and Rhode Island to promote electric vehicles, heat pumps, and alternative energy sources like solar power to reduce the use of fossil fuels.” A retired engineer, Don studied at Yale but was disappointed he wasn’t “big enough” to join crew. That didn't discourage Don from finding rowing for fitness, on and off the water. With his eye for design, Don enjoys what he describes as the “efficiently engineered” Concept2 RowErg. We’re honored (and impressed) he continues to churn out watts while contemplating green ways to produce watts. As Jane has noted, Don is his own engine; there continues to be only human-powered boats in his family.

To celebrate his birtday, Don has found an "extra gear". He will now enjoy finding speed in his new green machine, a Tesla electric vehicle.

We wish our best to Don and many more strokes ahead.

The 2023 World Rowing Indoor Championships are coming! Register today for the February 25th-26th event in Mississau… t.co/Zfunf8vvFH @concept2 about 2 days 6 hours ago.