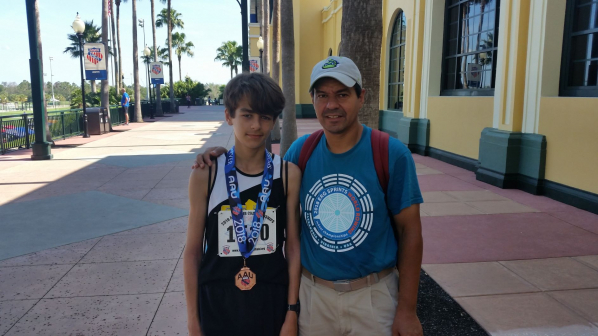 Richard Califano (New Jersey, USA), 47, is a retired attorney and full-time running coach and tutor to his 12 year old twins, Matt and Alex. On February 6, 2019, he became the first member of the 100 Million Meter Club.

What does it take to be the first 100 Million Meter Club inductee?

A love of rowing and unwavering commitment.

Meet Richard Califano, whose accomplishments in rowing are much larger than his coxswain physique may suggest. Richard started rowing at Princeton University in 1989 on the Lightweight Crew, albeit only briefly with an oar in hand. “My actual rowing career at Princeton lasted about 30 seconds, after which my coach decided I was too small and/or uncoordinated to row and made me a coxswain. I still rowed the Concept2, however, to get in shape and maintain coxswain weight which was then 125 pounds.”

Richard continued rowing after graduation so he could race in the indoor world championships in the coxswain division. During law school and throughout his career, he continued rowing on his Concept2 Indoor Rower at least six days a week to stay healthy. In 1997, he rowed a 6:59.7 PR at the CRASH-B World Championships to win the coxswain race after coming in second three years in a row (and previously losing by only one second!). He has broken seven minutes for the 2k distance twice in his career.

Richard continued racing through law school and his early career. He recalls one indoor race with unexpected talent. At a small 20-person race at a local YMCA, Richard was one of the few participants with rowing experience. “There was one unassuming veteran rower who was there participating and cheering everyone else on. I struck up a conversation with him after my race and it turned out he was Tom Amlong who, along with his brother Joe, was a member of the US Eight that won Olympic Gold in Tokyo in 1964.” This experience stuck with Richard: “There are not many other sports in which Olympians and National Team members compete side by side with novices in an environment of mutual respect and camaraderie.”

Rowing 100 million meters took Richard 30 years with working out six days a week—which means Richard spends approximately 45 minutes each day rowing. Concept2 recognizes every million meter milestone—even just 1 million is celebrated because it is a lofty accomplishment. Currently, there are less than a dozen known athletes above 90 million meters. Richard is the first to reach millions of meters exceeding nine digits!

How does Richard stay motivated? Richard joins Concept2 for seasonal challenges and for our milestone prizes. In the past 20 years, he believes he has done almost all of our online challenges. That’s a lot of challenges! In 2019, Concept2 will be hosting ten individual challenges and three team challenges. Many of these challenges reward as many meters as possible in the given time frame, which is one way to consistently accumulate distance.

Richard’s favorite workout is a simple 10k, which is his preferred workout 95% of the time. Attitude is everything: “I have never had an erg workout I regretted doing. No matter how little you feel like hopping on the erg on any given day you will walk away feeling better for having rowed.”

Even after rowing the equivalent of nearly 15.5 times up and down on the Amazon River, Richard has dreams of rowing (not coxing!) an actual race on the water. He continues to find inspiration from some of rowing’s greatest athletes: Matthew Pinsent and Steve Redgrave. “To be at the top of a sport as demanding as rowing for as many years as each of them was is almost unfathomable. I can't tell you how many times I have watched video of the British Olympic M4- at the Sydney and Athens Games.”

A proud owner of his 6th indoor rower, Richard currently rows on a Model E. He started on a Model B—used it for 10 years, and moved onto a Model C which he has since given away. He still owns four machines. He uses the PaceBoat feature to make his workouts interesting. For intervals, however, he will rock out to some AC/DC. For his longer rows, he plays Beethoven or Bach.

So what do Richard’s friends and family think of his accomplishment? Richard shrugs. “The Concept 2 has been a part of my everyday routine for so long no one really gives it a second thought.”

Well, Concept2 certainly gives it a second thought. Many congratulations from our team to you!